Warkworth! Home to the Percy family, Kings of the North! More importantly, home to our heroine, Lady Percy. We were particularly enthusiastic about Warkworth because we think this was where Elizabeth spent most of her time whilst married to Hotspur. Incidentally, Mairin and I spend most of our time (too much) thinking about what Elizabeth and Hotspur’s marriage might have been like. It can be said with confidence that he was a ballsy man on the battlefield, and we presume that this would have translated into the bedroom. One can only speculate; and spending time in their family home encouraged us to speculate about this a great deal. 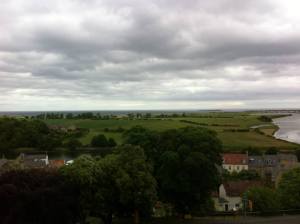 We were thrilled to learn that alongside our entry tickets we received headphones and a free audio guided tour. Now, we don’t usually have high hopes for these but the one at Warkworth is fantastic. Apologies to real-life guides Barbara and Pam whom we met at a later date, but this was just better and you can rewind the tour if necessary. You can’t force a retired member of the National Trust to repeat that crucial bit of info about the dating of the stonework, as French tourists gaze on, confused; it’s just not practical. However, this audio guide takes you, alone (and French tourist-free), across the bailey and into the keep, explaining the past use of each room. It even guides you to where the toilet would have been (very thorough). 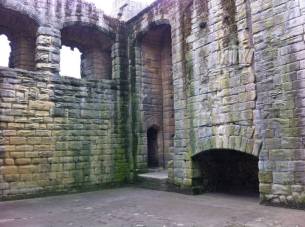 The first thing to say about this castle is that the keep really is in excellent condition. The design is from just after our period, when the castle was redecorated by Elizabeth’s son, the 2nd Earl of Northumberland, some time after 1416. However – fear not – it was apparently very similar in design to the earlier Medieval castle. It was amazing to see where the family bedrooms would have been (facing North – and where the wee 2nd Earl was conceived?) and to look out at the beautiful views of the Estuary and the sea that the family would have had. Looking out the other way, towards the view of the bailey, it was hard to imagine it busy and bustling with life. Warkworth has a strange, haunted quality and only the remains of the Great Hall are left. However, it would have been its own little town, with soldiers and cooks and knights milling about, busy at work. 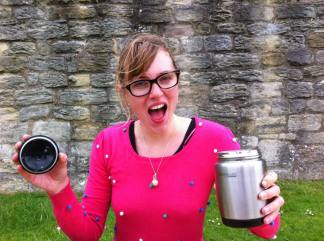 We thought about this as we ate our boiled egg picnic. It was eerily quiet and all you could hear was the flapping of the flag on top of the keep. The wind was getting up so we decided to have a nice, warming cup of tea, but unfortunately, Mairin (eager to prevent any leakage) had screwed the lid of our flask so tight it was quite literally fused shut. We decided to ask a passing male and then preceded to emasculate him when he too found it an impossible task. Finally, after handing the flask back, ‘Muscles O’Hagan’ did the impossible and opened the flask. We told the man he had probably loosened it, but the truth is, Mairin just has the strength of a buffalo.

You would think this enough excitement for one day; however, after taking a little rest on a bench just outside the castle, we witnessed a lot of drama over a very small shrew.

A gentleman and fellow castle enthusiast began grabbing at the rogue shrew, who had been minding its own business and chilling on the grass and occasionally, (for funsies) the pavement. The man insisted that it shouldn’t be there because grass isn’t a shrew’s natural habitat. I don’t think this is true and the shrew looked happy enough to me, apart from when the said gentleman kept poking it. Next, a woman’s dog tried to eat the shrew. However, the shrew didn’t give a shit and basically stuck two fingers up to everybody by milling about playfully, clearly displaying its devil-may-care attitude for all to see.

The frenzy over, we returned to Warkworth to buy a couple of very useful books:

I did try to look on Amazon to see if they were cheaper, but due to Northumberland’s county-wide lack of signal, I gave in and bought them from the gift shop. Also, I felt bad because as a castle enthusiast, one should support castle gift shops.

Let that be a lesson to you all. 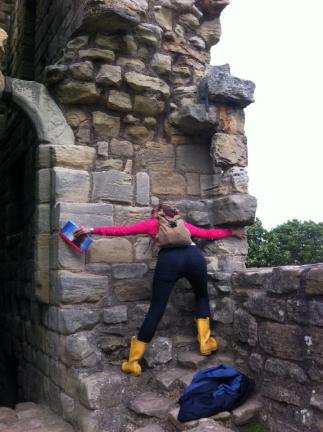