Máirín taking on the role of big John of B himself

Naturally, when in Canterbury, it would be absurd not to make a pitstop at the Cathedral and buy a souvenir pencil case. After accidentally driving all the way down a pedestrianised high street (pretty embarrassing), we put on our best pious pilgrim faces and blagged our way in for free.

A word of caution, however: when reading your favourite traveller’s guides to Medieval religious dwellings, such as the Canterbury Tales and, er, the other ones, do just check your publication dates before you throw your bundle over your shoulder and slam the front door behind you. Anything pre-1530 could be misleading, and you may well find that some of your favourite saints, relics and even whole monasteries just aren’t where they used to be. I tell you for one who isn’t at the shrine of the holy St. Thomas Beckett at Canterbury cathedral…The holy St. Thomas Beckett, that’s who.

To help you imagine what the big empty void was like when it did in fact house a shrine, they’ve popped a wee candle in the middle of the floor. 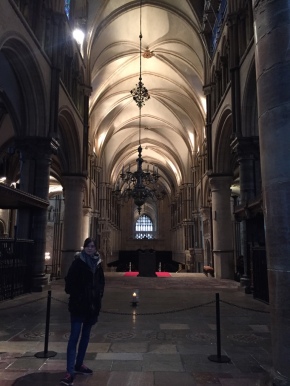 Just because we had neglected our post-reformation travel reading however, doesn’t mean that Canterbury was a wasted trip. Reeling from our Beckett disappointment, we turned a corner, and bumped right into King Henry IV. You know, Henry Bolingbroke the enraging antagonist of our beloved Hotspur. Henry Bolingbroke the terrible usurper of his cousin and former friend King Richard II. Henry Bolingbroke son of our favourite wealthy studmuffin Mr. John of Gaunt. The Henry Bolingbroke, indeed, who does that thing in Henry IV Part Two by Shakespeare, where he falls asleep and his son Hal thinks he’s dead and starts crying and wearing the crown and thinking himself King of England, and then his Dad just wakes up again and is really pissed off.

Well, if you wend your way into Canterbury Cathedral of a springy afternoon, that very same King Henry IV is just lying there, actually dead this time, beside his wife Joan of Navarre (also dead). 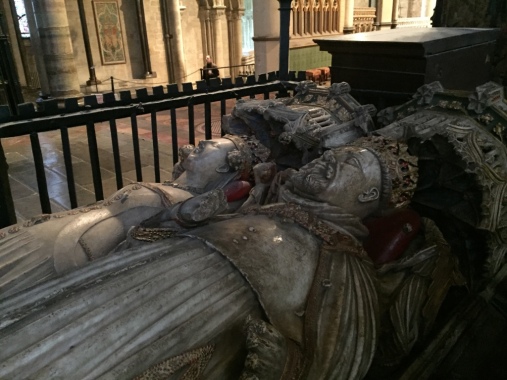 The way it works for them is that their actual bodies are buried, but they’ve got some really nice fake bodies cast on top so we know what they look like. I personally was surprised to see how short Henry was in the cast iron flesh. (But that’s not a judgement because I’ve always preferred a man with whom I can literally see eye to eye). These great men really aren’t so great when you see them lying down. As his poor, betrayed cousin Richard would have put it right before Henry Bolingbroke went and usurped him:

Cover your heads and mock not flesh and blood
With solemn reverence: throw away respect,
Tradition, form and ceremonious duty,
For you have but mistook me all this while:
I live with bread like you, feel want,
Taste grief, need friends: subjected thus,
How can you say to me, I am a king?

Naturally we were really excited by this surprise Royal encounter, which frankly was more of a coup than we were expecting, and we had to satisfy our immediate urge for a suitably mournful and respectful set of snaps.

That done, we noticed another interesting thing about these effigies. Henry has a lion under is feet! Heel, Leo! And Joan– I’m not certain– but she seemed to have some kind of lapdog-cum-weasel. I don’t know about you, but now I’ve seen the tombs of some fashionable monarchs, I’m going to be thinking about what kind of strange foot animal I’ll be wanting on my grave. An owl for my great wisdom? A scorpion for my vengeful nature? A hamster, as a memorial to my vegetarian lifestyle? A Pokemon to prove I caught them all? I just don’t know. What would you chose?

Across from these guys, we found The Black Prince. Possibly the most mysterious Prince of Wales ever, because instead of using his name they always call him The Black Prince. He was great at fighting and would have been King of England instead of poor usurped Richard, but he had dissentry for, like, four years and then died young. For his grave, he was actually resting his head on a lion. What a brave effigy, to dare rest his head on a lion! We know he was surely made of stern metal, that Black Prince! Having overdone the excitement after our Henry discovery, we were a bit less exclamatory about throneless old BP. He had some lovely apparel though. They hung it from the ceiling above his tomb so everyone can see how great his apparel was. Or maybe to avoid another Henry IV/Hal style situation where he’s not really dead and he wakes up and someone’s wearing his fave hat/crown and he’s really, really mad about it. Don’t worry BP your jazzy hat is still there waiting for you! I did observe at the time that it would actually really suit Sarah (she’s great in a hat of yore. See below), but if she’s really keen, she’ll have to find herself a replica, because that cathedral is alarmed… 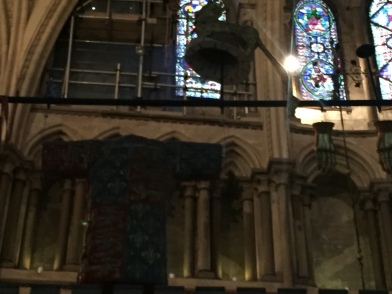 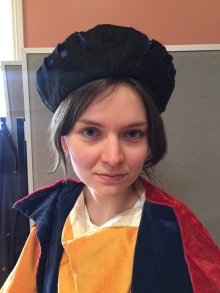